The Smuts House Museum seeks to represent faithfully the life-style and multi-facetted career of one of South Africa's greatest sons, General J. C. Smuts, and to promote the holistic vision which he expounded in his life and writings.

Images of Ouma Isie's Restaurant and its Surrounds

For more details about Ouma Isie's Tea Garded please visit our Facebook page https://web.facebook.com/oumaisies or email us at This email address is being protected from spambots. You need JavaScript enabled to view it.

Ouma Ise Krige Smuts. born as Sybella Margaretha Krige (1870 - 1954) was the wife of General Jan Smuts. She grew up in Stellenbosch and met Jan Christiaan Smuts in 1887. She was a teacher while he studied law at Cambridge University in England. After a courtship of ten years the couple married in 1897 and settled in Johannesburg before moving to Doornkloof, Irene. She gave birth to nine children but raised only six as the other three past away as infants. She also raised a foster daughter.

She supported her husband who would later serve twice as prime minister of South Africa from 1919 to 1924 and 1939 to 1948. Becornilig first lady of South Africa did not change her - simplicity, dignity and composure prevailed. She was renowned for her hospitality, entertaining a variety of people - from locals to royalty including Princess Elizabeth who today is Queen Elizabeth of The United Kingdom. She ran an efficient home and preferred the Big House to the prime ministers' official residences in Pretoria and Cape Town.

During the Second World War the became world famous as the Chairperson of the South African Gifts and Comforts Fund. This was a successful programme with the aim to bring home comforts to the South African armed forces serving in Africa and Europe.

Intellectually she was her husband's equal. She was extremely well read and could speak several languages fluently. She also loved music. She had an inner strength and resilience devoid from any airs and graces and could hold her own with any personality on the world stage among them the British and Greek Royal Families. Other renowned statesmen and intellectuals of the era that come to mind are Winston Churchill, Olive Schreiner, and Emily Hobhouse.

She bore witness to the Anglo Boer War, World War One, the Spanish Flu Pandemic, the Great Depression and World War Two. She died in 1954 at the age of 84.

The Big House - Home of the Smuts Family

General Smuts bought, for £300, the wood-and-iron building that had served as the officers' mess. It is believed that the building was originally prefabricated in Britain, taken to India by the British Army and later shipped to South Africa. Now, once again the building was dismantled. It was brought to Pretoria by rail, and thence to the farm Doornkloof by ox wagon, where it was re-erected at the substantial cost of £1000 in 1909. General Smuts was at sea, on the way to England as a member of the National Convention delegation, when Mrs Smuts moved her family into the house on 10 July 1909. The plan was altered on rebuilding, and as the years passed a kitchen and pantry (1918) and other rooms were added, and verandahs were enclosed (front verandah, 1942).

The Big House is, however, substantially as it was a century ago. The unpretentious building strikingly illustrates Smuts's indifference to luxury and ease of living, and here he spent the happiest hours of his life. Among the famous guests whom Ouma, Smuts' wife, entertained in her home were the British Royal Family, who visited them at Doornkloof while on the Royal Tour in 1947. General Smuts found his peace at Doornkloof. It was to Doornkloof that he retreated from the affairs of State which occupied so much of his life. At Doornkloof Smuts could indulge his absorbing passions for botany and philosophy. There he could enjoy the simple life of a farmer, father and grandfather.

After his death in 1950, Mrs Smuts continued to live in the only real home she had ever known, until her death in 1954. Both General and Mrs Smuts died in the Big House. Their ashes were scattered, as were those of other family members, on the top of Smuts Koppie - the rugged hill behind the house.  The Smuts House also served as Lord Kitchener's Mess in Middelburg, Transvaal.

General Smuts is widely known for being an avid lover of both Philosophy and Botany. Smuts grew up on the Smuts family farm, Bovenplaats, in the Cape Colony. He would often go out alone and explore the countryside. Throughout his lifetime he went on many botanical expeditions all across South Africa, where he would collect plants.

Smuts was also a mountaineer and one of his favorite treks was up Table Mountain. This route is now named Smut's Track in commemoration of the General. His love for botany can be seen in the stunning wild gardens on the Smuts' property. Some of the trees on the stand have very special history to them, such as the Magnolia seeds were planted by Ouma from seeds given to her by Emily Hobhouse. The London Plane trees on the property also have historical value as they were planted there by MOTH (Memorable Order of Tin Hats) Shellholes.

The three brochures below are available at the entrance desk at a cost of R15 each. These 16 page brochures supply much background information about the Big House, Jan and Isie Smuts and the various displays in the Museum. The brochures contain many useful images and will serve as valuable keepsake for your visit. 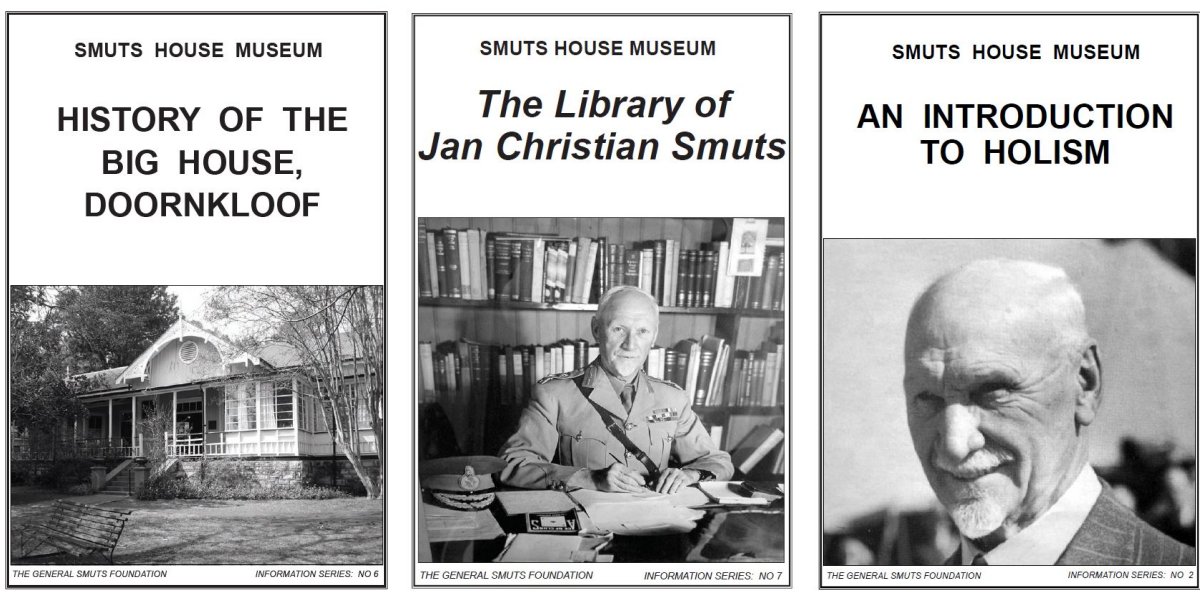 Mrs Kitty Smuts, Smuts' daughter-in-law, widow of Japie Smuts, inherited the Big House. Finding it difficult to maintain the old house, she offered it to various organisations, but they declined her offers. The Smuts family removed items of furniture and objects of sentimental value from the Big House while items of significant historical interest were donated to institutions best able and willing to preserve them.

There was interest in the property, the Big House was on the point of being sold to a German consortium for purposes of establishing a sanatorium at which stage it came to the notice of Guy Braithwaite who stepped in and bought the property. In July 1960, a contract was concluded whereby the Big House and 25 morgen (21 hectares or 53 acres) of surrounding land were sold for £7000 by Mrs Kitty Smuts to Mr Braithwaite, an ex-serviceman and Pretoria attorney. Mr Braithwaite personally paid the 10% deposit on the same day. He announced proudly that "Doornkloof had been secured for the nation as a permanent memorial to the Oubaas and Ouma and all the ideals which we cherished and for which we fought during the war years".

A congress of ex-servicemen and servicewomen's organizations was held at Doornkloof on 8 October 1960, at which it was decided that a Section 21 company (i.e. a non-profit company), to be known as the General Smuts War Veterans' Foundation, should be registered "to hold Doornkloof in perpetuity"

The culmination of these early efforts was the declaration, in 1969, of the Big House as a National Monument by notice in the Government Gazette, No. 2551 of 31 October 1969.  In 1994 the name of the General Smuts War Veterans' Foundation was changed to The General Smuts Foundation.

The Foundation is a private not for profit organisation founded in 1961 to preserve the legacy of the Rt Hon General Jan Smuts and his wife Isle Krige Smuts. Its Board of Directors and the Executive Committee members sponsor their time and skills to keep the legacy and history available to future generations. The Foundation receives no grants, nor financial assistance from government or private quarters. We wish to appeal to the history-loving public to contribute with donations, volunteering skills and sponsorships. We are also embarking on a Patron Programme to encourage both awareness and monetary assistance.  Please click here for further information.

Today the grounds operate as a museum - please visit and experience first-hand the enormous legacy left by Jan and Isie. Jan Smuts was the founding father of human rights, the League of Nations and later the Unit. Nations. He was the only world leader present at signing of three peace treaties - the end of the Anglo Boer War, World War One and World War Two. The General Smuts Foundation is entirely dependent on donations for the perseverance and upkeep of these beautiful grounds. 11 does not receive any private or government funding. Any support be it financial, time or donation relating to the upkeep will be very mu. appreciated. Please feel free to explore the grounds, walk the trail, take your dogs for a walk, or bring your children to roam this special "farm".​ ​

Administration of the Museum

The General Smuts Foundation still owns and administers Doornkloof. The tea garden, caravan park and Arts and Crafts Market generate some of the funds necessary for the day-to-day administration of the museum.

The administration of the Smuts House Museum is an interesting model for cultural preservation in South Africa today. Government does not have the resources to preserve the cultural heritage of all interest groups, and the onus for the identification and preservation of specific sites and aspects of history will have to rest on those with a particular interest in their preservation.
Financial Contributions and/or Smuts memorabilia will be most gratefully accepted.

Ouma Isie`s Tea Garden is now under new management. Thinus Olivier and his team have done a marvelous job in revamping the facility and bringing it up to a very pleasant restaurant standard.

Ouma Isie's is now the perfect place to visit ... out in the open air with proper social distancing and some peace and tranquility to refresh your body and soul. The Restaurant offers a variety of daily menu items and also caters for Functions, Children`s Parties, Kitchen Tea`s, Weddings, Conferences, Year-end Functions or any other special event or celebration. Please visit our Facebook page for more information:
https://web.facebook.com/oumaisies

Come visit us at the Smuts House Museum in Irene. We do breakfasts and lunches and you can even bring your dog along. And we have a roofed area for when it's raining.

The Museum is open to visitors on Wednesdays, Fridays, Saturdays and Sundays from 9:00 to 16:00. Special tours are possible on other days by prior arrangement - please enquire via:
info@smutshouse.co.za.
We have kept our prices as low as possible in the foregoing years but need to align ourselves with other Heritage Sites. Bear in mind the entire homestead is private property and we benefit from no grants or subsidies. Many thanks for your support.

For any further information regarding the Smuts family or Smuts House and its history, please email us and we will assist where possible: info@smutshouse.co.za.

Following the COVID-19 disruptions to the planned supper talks, a new schedule will be announced shortly. For further information please email:

For more details and bookings please click on UPCOMING EVENTS

The FRIENDS OF SMUTS HOUSE would like to thank all those people who kindly donated money as a result of our appeal via the Jan Smuts Facebook group during the Covid lockdown period. Personal notes of thanks were sent to individual donors, except those who didn't supply contact details, and to whom we now extend our sincere gratitude.

If you have donated (and didn't supply your email address), or if you still intend to do so, please fill out the form on the DONATE tab so that we can send our personal thanks.

Despite the response to our appeal during the Covid pandemic, which raised some R60 000, The Foundation remains in dire need of additional financial support so that any further donations will be most gratefully received. 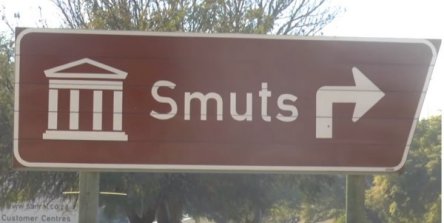 Kindly note: the Museum operating times are Wednesdays, Fridays, Saturdays and Sundays - 9:00 to 16:00. Special visits on other days may be made by prior arrangement with the Liaison Officer.

Ouma Isie's Tea Garden and Restaurant is open every day except Mondays (apart from Public Holidays falling on a Monday).